In response to the Climate Etc. crowd review of the US Global Change Research Program Climate Science Special Report  (CSSR) Fifth-Order Draft, what follows are brief exceptions to the report:

Page 13, Line 1: “Global and US Temperatures Continue to Rise”

The problems with this statement and segment are not factual. Rather they are contextual. Presumably, the reference is to the annual averages of local daily mean temperature observations. Numerous data sets ( land & ocean surface, balloon based, and satellite ) tend to confirm this. But the context is misleading. The annual average of temperatures is not a term in any significant equations of climate. The follow on statement: “Temperature ( and above all, its local averages and extremes ) affects agricultural productivity, energy use, human health, water resources, infrastructure, natural ecosystems, and many other aspects of society and the natural environment.”, is similarly uncontroversial, but perhaps should include a statement “The effects of increased temperature may be as likely convey net benefit as opposed to net detriment with respect to agricultural productivity, energy use, human health, water resources, infrastructure, and natural ecosystems. To wit:

The temperature at which photosynthesis maximizes increases as CO2 availability increases, providing benefit of both CO2 and increased temperature: 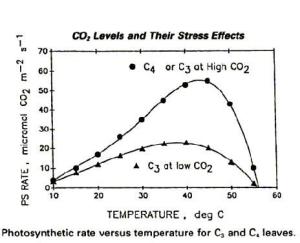 The US population weighted “Residential Energy Demand Temperature Index”, a measure of energy required for heating and cooling homes, indicates a decrease over the same period of average temperature increase:

Measures of human health are multi-factoral, of course, but we may point out the general increase in longevity concurrent with increased temperature. Further, weather and climate ( including heat, cold, and violent events ) are so comparatively rare causes of death, that they do not appear on the US CDC lists of leading causes. Further, human mortality peaks during the cold season and troughs during the warm season.

Water resources are sustainably a function of precipitation. According to the US National Climatic Data Center, Precipitation falling over the contiguous US has increased along with warming:

And vegetative biomass appears to have increased in concert with the increase in carbon dioxide and temperature:

Page 14, Line 21, implies that natural internal variation of events such as ENSO events, are insignificant over years.

However, ENSO events exceeding absolute value of one have clearly changed over multi-decadal time scales. Such events are not necessary to explain temperature trends, but it is erroneous to exclude decadal or longer internal climatic fluctuations:

Page 15, Line 24,”Without major reductions in the emissions, the increase in annual average global temperatures relative to pre-industrial times could reach 9F(5C) or more by the end of the century.”

According to the NCDC, global temperature trends are maximal from the end of the global cooling period of roughly 1945 through 1975. This maximal rate is about 1.7C per century: 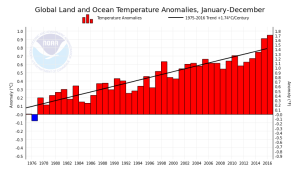 The rate implied by a 5C difference at the year 2100, is two to three times larger than the maximum temperature trend observed! What’s more, annual rates of radiative forcing increase have decelerated since peaking in the 1980s: 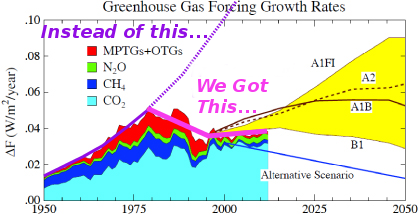 The extreme value suggested is unsupported by observation and should be retracted. 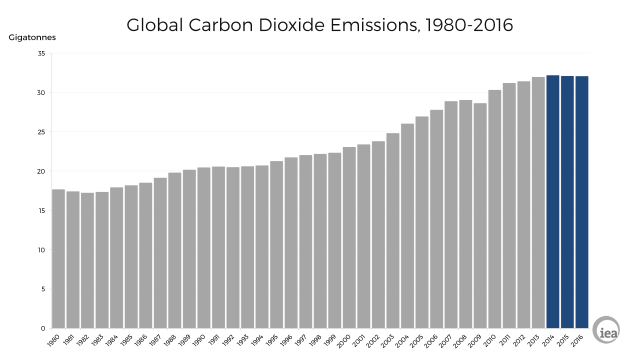 This figure should be updated to reflect the most recent data and new reality.

Using hindcast data falsely implies skill, particularly when models are tuned to past observations. A valid comparison of past data is only of predictions made before observations. In 1988, James Hansen made testimony before Congress. Temperature trends since that time are positive, but far short of the mid range projection:

Presumably, this is for the US. This statement is omits the much longer US record which indicates that hot days in the US have decreased for over a century:

The report should indicate the decrease in heat waves in the US over the longer period.

Page 19, Line 16: “the frequency and intensity of extreme heat and heavy precipitation events are increasing in most continental regions of the world ( very high confidence )”

The historical record of observing stations around the world is one of extreme transience. Station records are very brief through out the history. Given this, the report should replace very high confidence with very low confidence.

In addition to the observational evidence of extreme heat decreasing, above, this statement is contrary to long understood models of warming.

“The general warming and the increase of moisture content of air, which results from a CO2 increase, contributes to the large reduction of the merdional temperature gradient in the lower model troposphere because of 1) poleward retreat of highly reflective snow cover and 2) large increase in the poleward transport of latent heat. The reduction of the merdional temperature gradient appears to reduce not only the eddy kinetic energy, but also the variance of temperature in the model troposphere.”

The report should remove this erroneous line.

Of course, tropical cyclones are not predictable more than a few days out and of course, and the Accumulated Cyclone Energy measure does not corroborate this idea:

Further, a major modeled aspect of global warming in association with increased carbon dioxide is the occurrence of a Hot Spot encompassing the tropics. Such a hot spot would tend to decrease convective available potential energy. While the hot spot has failed to appear for the era of recent surface warming, it’s not clear that the physical arguments made in this statement are valid.

The report should include the observational record and consider the uncertainty of this statement.

This entry was posted in Uncategorized. Bookmark the permalink.